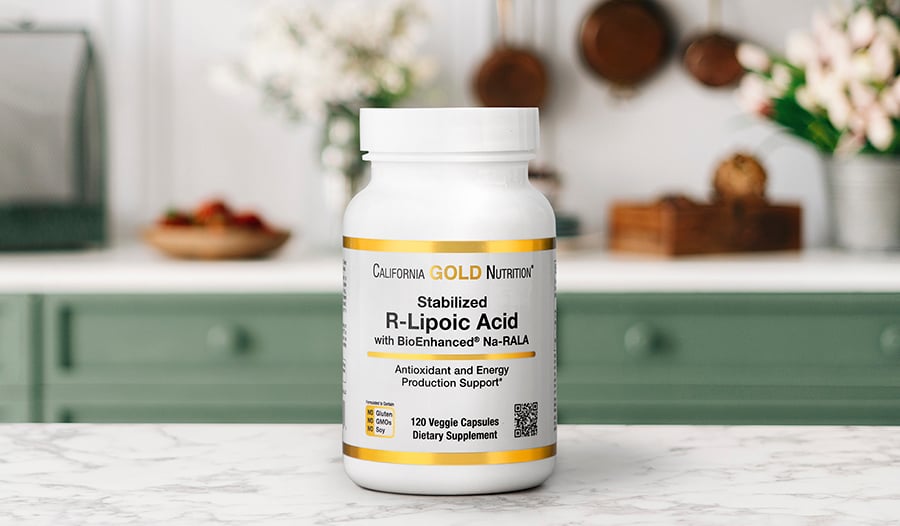 What Is Alpha-Lipoic Acid?

Alpha-lipoic acid (ALA) is a unique vitamin-like compound often described as “nature’s perfect antioxidant.” While ALA can be made naturally in the body, sometimes synthesis does not meet demand, and supplementation is required.

Alpha-lipoic acid is a cofactor or coenzyme for at least five enzyme systems. This means that the enzyme cannot perform its required function without ALA. Two of these enzyme systems are involved in energy production, while the others are involved in detoxification and the transport of fatty acids. Not surprisingly, low cellular levels of ALA are associated with cell damage and dysfunction due to a lack of ATP and the antioxidant protection offered by ALA.

Since ALA is a tiny molecule, it is efficiently absorbed and easily crosses cell membranes. Unlike vitamin E, which is primarily fat-soluble, and vitamin C, which is water-soluble, ALA can quench either water- or fat-soluble free radicals inside and outside the cell. Furthermore, alpha-lipoic acid extends the biochemical life of vitamin C and E as well as other antioxidants.2

Are There Different Forms of Alpha-lipoic acid?

Alpha-lipoic acid (ALA) exists in two forms, one that contains the natural R form, known as R-ALA, and another that is often simply referred to as ALA that contains a mixture of the R and S forms. The R and S designation refers to the orientation of the molecule. They are mirror images of each other. The R form is the natural form of ALA  that is utilized by the human body. The S form is a synthetic form that the body does not use in any tenzymatic processes. ALA supplements contain either a 50/50 mixture of the R and S form, which can be designated R,S-ALA, or the purified R-ALA form.3

If the supplement is listed only as ALA on the label, it should be assumed that it is the R,S-ALA form.

ALA supplements are best taken on an empty stomach to enhance absorption.4

What Are the Benefits of Alpha-Lipoic Acid?

Because of its potent and unique antioxidant activities, Alpha-lipoic acid (ALA) has long been used to promote good health. It has shown an ability to boost antioxidant protection, detoxification, and liver health, support blood sugar control and healthy nerve function, enhance metabolism, aid in weight loss, and protect against aging.4

ALA may help support healthy aging by increasing antioxidant levels by influencing gene expression. Specifically, ALA activates a compound known as Nrf2, which orchestrates a complex regulatory network that affects metabolism, mitochondrial function, and inflammation.5

Nrf2 has been called the “guardian of the healthspan and gatekeeper of longevity,” because it protects the cell against damage and aging.6 One of the reasons Nrf2 produces these benefits is that it is a powerful activator of an enzyme known as NQO1 that is critical for several reactions in cells. Too little NQO1 is associated with impaired detoxification, lower energy levels, and altered cellular function. Among its critical reactions, NQO1 converts CoQ10 from its inactive form (ubiquinone) to its active form (ubiquinol).

ALA has also been shown to protect the structure and function of the blood-brain barrier. Typically, this protective barrier prevents the passage of large molecules and white blood cells into the brain. If the blood-brain barrier is damaged, it leads to significant inflammation within the brain. ALA has also shown the ability to inhibit the formation of various compounds associated with promoting inflammation within the brain.9

Human clinical studies have shown ALA to protect nerve tissue and the brain. Some of these studies have been performed in people with multiple sclerosis (MS), a condition characterized by a loss of the myelin sheath surrounding nerve fibers.9 The myelin sheath is critical for the transmission of the nerve impulse. Hence, in MS there is a significant disruption of nerve function. The clinical studies of ALA in MS have used dosages as high as 1,200 mg per day (R,S-ALA). Supplementation with ALA showed to improve nerve function and reduce the levels of matrix metalloproteinase 9 (MMP-9) and cytokines. Both are markers of nerve inflammation and damage.10,11

One of the longest uses of ALA supplementation has been in improving nerve structure and function in patients with diabetes-associated neuropathy. Numerous human clinical trials have demonstrated the benefits of ALA supplementation in these subjects.4,12,13 In a 4-year double-blind study of 460 diabetic patients with mild-to-moderate neuropathy, subjects who received 600 mg of ALA per day demonstrated significant improvement and prevention of progression of neuropathy.12 Improvements are generally seen within three weeks of supplementation of 400 to 600 mg of R,S-ALA. Some of these benefits may be due to improved control of blood sugar levels (discussed below).

Pre-clinical studies indicated that ALA may help to boost metabolism, promote the burning of fat as energy, reduce food intake, and potentially aid in weight loss. Several clinical trials have been conducted to clarify the weight loss-promoting effects of ALA. For example, in one double-blind study, 97 overweight or obese women were put on a weight-loss-promoting diet of 30% less than total energy expenditure. One group served as the control group the others were given either ALA 300 mg; a fish oil providing 1.3 g EPA; or the combination of ALA 300 mg and EPA 1.3 g.16

The study lasted ten weeks, and the control group lost an average of 11.44 pounds; the EPA group 11.88 pounds; the ALA group 15.4 pounds; and the ALA+EPA group 14.3 pounds. Hence, ALA supplementation alone or in combination with EPA enhanced the effects of dieting. ALA contributed approximately 3 pounds of extra weight loss over the ten weeks. Weight loss was associated with positive changes in lipid and glucose metabolism.

There are a couple of essential points to consider from this study. Most importantly, all subjects were placed on a reduced-calorie diet, which allowed even the control group to lose weight. The effect of ALA was to promote additional weight loss. Studies, where ALA was simply given to subjects wanting to lose weight, did not promote significant weight loss even if the dosage was 1,200 mg per day though there were improvements in waist circumference. Nonetheless, a detailed meta-analysis of 8 studies in weight loss concluded ALA supplementation significantly reduced BMI and waist circumference.17

Is Timed-Release ALA Necessary?

Alpha-lipoic acid (ALA) is available as a regular immediate-release product as well as a timed-released form. The existing evidence does not seem to support an advantage to taking a timed-release product. It looks like immediate-release formulations are better utilized. ALA is quickly absorbed with roughly the same percentage, whether the dosage is 50 or 600 mg. The absolute bioavailability of ALA indicates about 93% of the dosage is absorbed no matter what the dosage.4,18

While timed-release ALA is absorbed more slowly, that may not be a good thing as ALA appears to gain the most significant clinical benefits with oral ALA what is required is that the dosage flood or overwhelm the liver’s ability to grab hold of the ALA and thereby allowing it into the general circulation leading to rapid elevations in blood levels and delivery to other vital tissues. This goal appears best achieved with immediate-release products, and it is probably best to take the dosage once a day versus in divided dosages.4,18

Side Effects, Safety, and Drug Interactions

ALA is also highly safe as dosages of up to 2,400 mg daily produced no significant side effects. Minor gastrointestinal symptoms (such as nausea and upset stomach) a headache, and minor skin symptoms (primarily itching sensation, urticaria, or symptoms of allergic skin conditions) have been reported.19

ALA supplementation may require dosage adjustments for insulin or oral hypoglycemic drugs like metformin to improve insulin sensitivity and blood sugar control.

This article was written by Dr. Michael Murray, iHerb's Chief Scientific Advisor. For over three decades, Dr. Murray has been a thought leader, author, and expert in nutrition, dietary supplements, and natural products. He has published more than 30 books, including the bestselling Encyclopedia of Natural Medicine, now in its fifth edition, which has been used by over 100,000 health care professionals across the globe. Learn more about him on DoctorMurray.com or his iHerb Page.

28,762 Views
Often there are extremely positive preliminary results with a natural product in a very serious health condition and there are no follow up studies.

8 Antioxidants to Incorporate Into Your Diet

45,203 Views
You’ve probably heard that you should be incorporating more antioxidants into your diet, but what exactly are antioxidants and where can you find them?

We Make Melatonin From Serotonin: Here’s Why That Matters

7,001 Views
Your body produces the sleep hormone melatonin from the feel-good hormone serotonin. Learn to optimize melatonin production naturally so you can sleep easier.